You are here: Home / Contributors / BNP Paribas Open Day One: The Serena Question 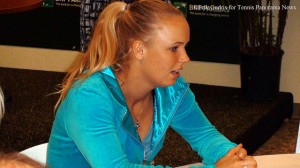 The opening day of action at any big event, especially one like the BNP Paribas Open, is usually focused on wrapping up qualifying rounds, taking in a few first round matches of note and catching up with the top seeds before they start play later in the week. And though the point of the WTA All-Access Hour was to give the media a chance to ask the top eight womenâ€™s seeds any question they wanted to, the question that dominated discussion was, and not a surprise, about the health of Serena Williams.

All the players wished Williams the best and echoed the sentiment that Williams would recover and likely return to the tour. Caroline Wozniacki, who while in L.A. was able to meet with Williams, expressed confidence that Serena would recover â€œ100%â€ while Kim Clijsters was candid in saying how the news of Williamsâ€™s recovery from a pulmonary embolism and then from hematoma â€œopened my eyes and has made me aware how aware we need to be about our bodies.â€ When asked about potential long-term damage to the womenâ€™s game with Williams being gone for a long time, Clijsters said, â€œTo me, Serena is the greatest womenâ€™s player ever. So for her to be outâ€¦ itâ€™s very disappointing for the public and the tournaments and everybody. To me personally, Iâ€™ve had some of my biggest and funnest matches against Serena and I want to have more of those matches in big tournaments against her, win or lose.â€

Last yearâ€™s semifinalist Sam Stosur, whoâ€™s playing doubles this week with French Open champion Francesca Schiavone, acknowledged Williamsâ€™s as â€œthe best player of my generationâ€ and her absence as a â€œlossâ€ but then added, â€œweâ€™ve (the WTA) still got lots of good players and personalities and different game styles to look to. Obviously sheâ€™s a huge name to lose but there are still a lot of other things to look for in womenâ€™s tennis.â€

But the questions werenâ€™t all about Serena. Defending champion Jelena Jankovic smiled and laughed quite a bit at a slew of questions about her ongoing house construction in San Diego. Looking very relaxed, Jankovic simply replied, â€œItâ€™s a big house. Itâ€™s a long process.â€ When pressed about the reported ten-car garage thatâ€™s part of the house and if she actually owns ten cars, Jankovic laughed that question off with a smile and then said â€œthatâ€™s a little too much information.â€

And with that All-Access day was over. Now itâ€™s time for the women to let their tennis do the talking on the purple courts of Indian Wells.

Erik Gudris, moderator of Adjusting The Net, is covering the BNP Paribas Open this week for Tennis Panorama News. Follow his live updates on Twitter at @GVTennisNews.