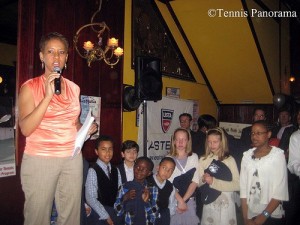 Former WTA player and current Tennis Channel analyst Katrina Adams is the Executive Director of the program and played hostess for the eveningâ€™s events. Included among the guests were tennis analyst and current president of USTA Serves Mary Carillo and former New York City Mayor, USTA board member and tennis enthusiast David Dinkins.

In addition to tickets sold, monies were raised from both live and silent auctions. Some of the items included signed racquets donated by Andre Agassi/Stefanie Graf, Pete Sampras, Venus Williams, Roger Federer, the Bryan Brothers and Maria Sharapova. Other big ticket items for bidding were tickets to the President’s Suite for the 2011 US Open, tickets to the Sony Ericsson Championships, a week at the Evert tennis Academy, a week at the Saddlebrook resort,Â  tickets to the ESPY’s andÂ  a hitting session with Patrick McEnroe. 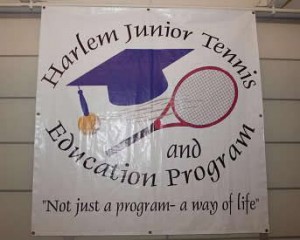 The mission of the Harlem Junior Tennis program is “to bring tennis to youth from high risk, low income inner-city neighborhoods and offer opportunities for self- development, while highlighting education and a positive code of behavior.”

Approximately 25% of HJTEP participants go on to be awarded college tennis scholarships. Some of the colleges the programâ€˜s alumni have attended are Duke, Howard, Syracuse, Tulane, Harvard, Dartmouth, Columbia, Temple, Rutgers, Georgetown, New York University and many others. James and Thomas Blake are alumni of the program. HJTEP was founded in 1972.