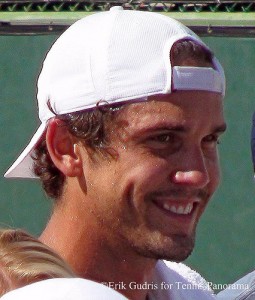 Itâ€™s a misleading to say that the first Sunday of the BNP Paribas Open is when the tournament really begins as the event has been going strong for almost a week now. But this is the time when the big names, especially on the menâ€™s side finally start to play their opening singles matches while on the womenâ€™s side, exciting matchups start to fall into place as the quarterfinals beckon.

If thereâ€™s been a trend or developing story this first week, it has to be that of the young Americans who picked probably the best place outside of the U.S. Open to not only play some good ball but also earn some much needed respect after the lengthy debate so far on â€œwhatâ€™s wrong with American tennis.â€Â  Ryan Sweeting, fresh off his three set win over Juan Monaco, was mobbed by autograph seekers during his practice session today hoping to get a signature and even a photograph with Sweeting who was likely unheard of by most fans a week ago. The other Ryan, Ryan Harrison to be exact, continued the streak of upsets by American players on Stadium 2 with a 6-4, 7-6 victory over No. 22 seed Guillermo Garcia-Lopez that saw Harrison get into a heated exchange with the umpire after she made Harrison replay the point on a challenge he won when Garcia just tipped the ball with his racquet. Harrison will now face Â Milos Raonic match and though many wanted to see Fish keep the American streak going, the prospect of a Harrison/Raonic encounter is likely what most fans want to see.

But it was some â€œolderâ€ Americans facing each other in a second round encounter that ended up being the match of the day, if nothing more for the sake of nostalgia. Despite displaying flashes of the game that got him to No. 4 in the world, James Blake couldnâ€™t summon enough of it to get past friend and fellow Davis Cup teammate Andy Roddick who won 6-3, 7-5. The question now for Blake, who is currently ranked 158 in the world, is how he will fare the rest of the year, especially if heâ€™s unable to get wildcards into big events. For Roddick, the win over Blake sets up another battle with another American as he faces John Isner in the next round.

Kim Clijsters won in three sets over Italyâ€™s Sara Errani despite the reigning U.S. and Australian Open champion hitting more errors than winners in the match. Clijsters later said sheâ€™s been dealing with some nagging shoulder pain but thinks she can manage it through the rest of the spring hardcourt season. The end of the day session saw Roger Federer win 7-5, 7-6 (4) over Igor Andreev in a tight match that saw the Russian test Federer quite a bit throughout the match. Federer will now face Juan Ignacio Chela next.

Can the American winning streak continue? And which one of the big names on both the menâ€™s and womenâ€™s side will prevail in the finals next Sunday. Stay Tuned!

Erik Gudris writes and moderates the tennis news and commentary site Adjustingthenet.com. Follow him on Twitter at @adjustingthenet