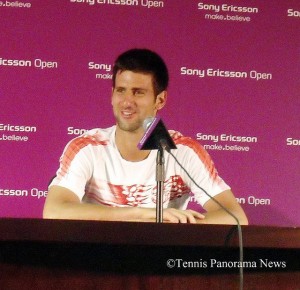 Novak Djokovic is simply “el fuego.” Djokovic served bakery items again on Wednesday at the BNP Paribas Open, this time to his fellow Serb and doubles partner for the tournament, Viktor Troicki 6-0, 6-1.

Djokovic on his play:”I don’t think I’m playing, you know, incredible tennis.Â I think I’m playing really, really solid and getting a lot of balls back into the court and making my opponent play an extra shot.Â Obviously I had two very big hitters yesterday and today, and big serves, but I was managing to return a lot of balls in and making them, you know, put a lot of unforced errors.Â That’s what happened today.Â I think he had a very bad match in general.Â But I was very solid, and I keep on playing well.Â So this is what makes me happy.” 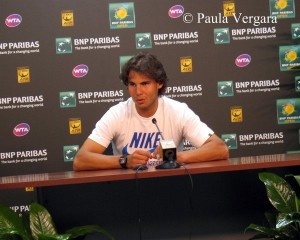 Rafael Nadal was up against his third consecutive qualifier, this time in India’s Somdev Devvarman. No bakery items today for Nadal, Devvarman stayed shoulder to shoulder with the Spaniard and pushed him throughout. Nadal played the big points better for a 7-5, 6-4 win.

Nadal on the match: Well, I played really bad, I think. Thatâ€™s the beginning. I played really bad, especially in the beginning. I think he didnâ€™t play well in the beginning. First he was winning 3-1 â€” no, 2-0, and he didnâ€™t play well, but I played terrible in the beginning.
So after that I improved a little bit, but the first set in general, for me, was really bad, because I wasnâ€™t able to play aggressive with my forehand. I didnâ€™t see no one time the opportunity to go inside and to play the winner.
So in general, the level was very low in the first set, in my opinion. The second set improves a little bit. I think I had the win before. Had Love-30 two times, had 15-30 another time, and big chances to win 6-2, 6-3 in the second, no?
Because I was playing much better in the second set. For sure not perfect, but, you know, you have to come back after a terrible first set and the mental situation is difficult to change a lot. If you played really bad the first set, in the second set, even if you play not bad, your vision is difficult to appreciate if you are playing better or not, because your confidence is low after about the first set, no?
I think the second set was correct; wasnâ€™t bad second set. Thatâ€™s the most positive thing, so I played much better in the end of the match than in the beginning.

Nadal will face Ivo Karlovic in the quarters. Karlovic bounced out Alberto Montanes.

It was no piece of cake for Roger Federer against young American Ryan Harrison.Â  After being broken in his first service game, Harrison began to play without fear and Federer played as though he did not know how to hit a forehand. Federer failed to close out the first set on own his serve up 5-4 and 6-5 but held on in the tiebreaker 7-4. Federer found his forehand in the second set and held on for dear life to win the match 7-6, 6-3.

There were moments in the Richard Gasquet â€“ Andy Roddick match when you were just waiting for the Frenchman to break down. Gasquetâ€˜s gorgeous backhand was working Roddick over and he was reading the Americanâ€™s serve as though it were a Dr. Seuss book. Gasquet moved to a set and a break lead at 4-3 played a sloppy game to get broken â€“ you knew a momentum shift was about to take place. Gasquet steadied himself saved three set points took the tibreak and the match 6-3, 7-6. Gasquet will play the fiery hot Djokovic next in the quarters.

Juan Matin Del Potro is on the road back. The Argentine took out another seeded player at the BNP Paribas Open on Wednesday â€“ Germanyâ€™s Philipp Kohlshreiber 7-6 (3), 7-6 (7). Del Potro had to rally from 1-6 in the second set tiebreak.

â€œIâ€™m playing better match by match, and I donâ€™t know if I can play better than today,â€ Del Potro said. â€œI just want to work hard. I need time to do it. Iâ€™m very patient.â€

â€œI am playing better than two months ago. I know itâ€™s a long road, but Iâ€™m still improving my serve, my forehand.â€

â€œItâ€™s very tough to play every day against these kind of players, and I need time to feel 100 percent again.â€