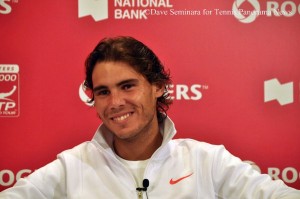 On the very day that the 2011 NCAA Menâ€™s basketball championship began, the BNP Paribas Open had its own form of â€œMarch Madnessâ€ in a quarterfinal match between No. 1 Rafael Nadal and No. 239 Ivo Karlovic.

The Spaniard had to battle back from a set down to win in a third set tiebreaker on Thursday in Indian Wells. The skyscraper tall Croatian Karlovic who is on a comeback trail after an achilles injury suffered last year fired 23 aces at Nadal, but the Spaniard survived the pressure.

Both men stood toe-to-toe in the third set holding their service games easily until the tiebreaker at 6-6. Nadal gained a mini-break advantage immediately but Karlovic rallied from a mini-break down three times including a match point on Nadalâ€™s serve. On match point number three Karlovic sprayed a forehand approach shot wide â€“ game, set and match Nadal â€“ 5-7, 6-1, 7-6 (7).

Nadal advances to the semifinals where heâ€™ll face Juan Martin Del Potro. Survive and advance Del Potro moved on to the semifinals when Tommy Robredo withdrew from the tournament with a left adductor injury suffered in his fourth round victory over Sam Querrey. hell also miss the Sony Ericsson Open in Miami which begins next week. 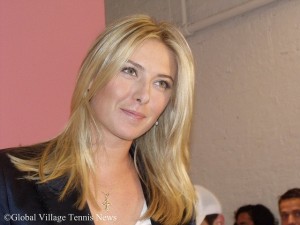 Sharapova: â€œI was playing really well for the first set and a half and then really let her back in the game.â€

â€œSheâ€™s a really aggressive player and puts a lot of pressure on from you the first point, and if youâ€™re not the one doing that it becomes dangerous. The most important thing is I got myself together and I focused and regrouped.â€

Caroline Wozniacki moved on to the semifinal to face Maria Sharapova when Victoria Azarenka retired from her match with a left hip injury suffered from a fall on court. Wozniacki was leading 3-0 at the time.

Wozniacki : â€œVictoria is one of my best friends on the tour, and to see her in pain on the court and to see her get injured was not nice for sure,â€ said Wozniacki. â€œI would like to have won it in another way, but I’m through to the semi-finals. I’m happy to be there. I’m looking forward to my next match.â€

After the match Wozniacki unfurled a Japanese flag with the words: â€œOur thoughts are with you! Caroline & Victoria.â€ The flag had been draped on the umpire’s chair tower during the match. 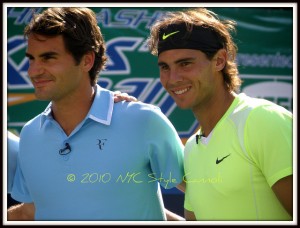 It will be Roger vs Rafa on Friday – not in singles but in doubles. Roger Federer and Stan Wawrinka team up against defending champions Rafael Nadal and Marc Lopez in the semifinals of the men’s doubles at the BNP Paribas Open. Tennis Channel will air the match live at 3 p.m. Eastern time.