You are here: Home / Features / Of War and Radiation: Kim Clijsters Speaks 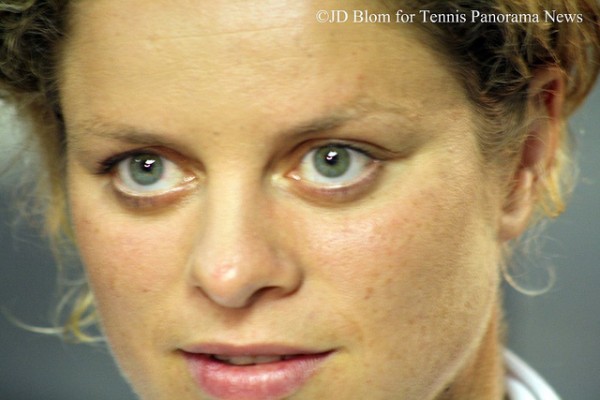 But it was Clijsters who spoke most candidly about recent world events. Probably because she was sharing her thoughts and feelings in her native tongue to journalists from her country. Something about being around your people that opens you up. What follows is translated from Flemish.

Q: When you are looking at the world events of Japan and Libya do you think about what is happening to the world and Jadaâ€™s future?

KC: Certainly. As soon as I heard that there was a radioactive cloud on its way to the west coast, normally I would not have worried about that, because you think itâ€™s so far away. But this time I was â€œLetâ€™s get out of here as soon as possible,â€ and also with Jada you think about it differently. When I was younger I used to worry about stuff, like when we had to go to Australia or Tokyo, and the war in Kuwait (sic) was going on and then on your flight map you could see that we were flying over Iraq and Iran and I had quite a bit of fear. I want to follow world affairs, but I do know that when Jada is walking around I donâ€™t want her to see those things. But Brian looks at it quite differently. He knows what is happening and feels badly about it but it does not affect him as much as it affects me.

I was like, â€œWe need to get those pills.â€ I went to all the natural food stores to look for products with natural iodine like seaweed, spirulina, and kelp. I bought it all. And Brian just laughs at me. He is like, “If the government says it will not have any influence no problem,” but I think they are lying. Of course, they say that because they canâ€™t evacuate the whole west coast. But I wonâ€™t be fooled. Even in Belgium my sister and aunt called me saying, â€œYou gotta leave because the cloud is coming, or you can just put Jada alone the plane and weâ€™ll pick her up here at the airport.â€ What a panic. It was a bum. Do you really think it can get here in Indian Wells? I didnâ€™t even want to imagine it.

Q: Then thereâ€™s the Toray (Pan Pacific Open) in Tokyo in October.

The world No. 2 retired from her fourth-round match in Indian Wells against Marion Bartoli citing a shoulder injury. She’s now happy to report that her shoulder and her wrist are improving and she’s ready to defend her title in Miami.