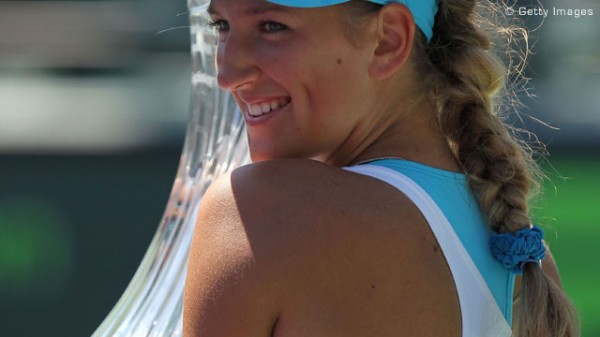 Victoria Azarenka won her second Sony Ericsson Open title in three years on Saturday by defeating Maria Sharapova 6-1, 6-3. Azarenka last won the tournament back in 2009Â  when she defeated Serena Williams in the final.

Azarenka made her way through the draw by knocking out No. 2 Kim Clijsters and No. 3 Vera Zvonareva.

AzarenkaÂ  : â€œMaria likes to swing big, and when she has time itâ€™s very heavy and coming fast. So I was trying to take time away from her. I think the heat really suits me well – I mean, it feels good!Â  Hardcourt is one of my favorite surfaces, and I’ve just been really working hard for these last two tournaments. I played very good tennis in Indian Wells, and unfortunately got injured.Â  It was amazing for me to come here and step up my game so well.â€
For Sharapova’s efforts this fortnight she’ll return to the top ten when the rankings are released on Monday.

Sharapova: “It’s a bit too late to pick up the pace when you’re down a set and 4-0. I wish I picked it up earlier. But I’m very, very happy about what I’ve achieved in the last three or four weeks. If you saw me 10 weeks ago after I pulled out of Paris, I was in no shape or form to even play a tournament. So it’s amazing I even achieved that. I went to Indian Wells without a lot of expectations – I was sick for almost three weeks. I got myself back in it and I’m definitely proud of that.”