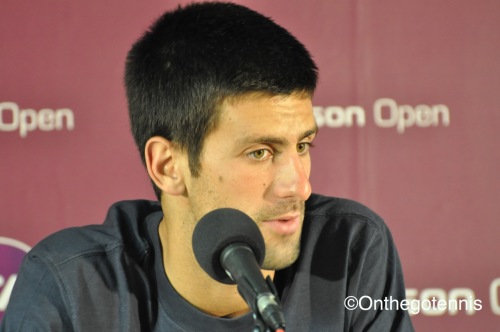 Novak Djokovic continues his perfect 2011 season with a 4-6, 6-3, 7-6(4)Â  win over World No. 1 Rafael Nadal to capture the Sony Ericsson Open.Â  â€œIt was one of the closest and best finals that I have played ever,” said Djokovic as he addressed the media in his post-match news conference. ” To be able to win against a great champion like Nadal is, of course he’s No. 1 player of the world, and at this stage he’s always playing his best. I think it was very high level of tennis today. I think everybody enjoyed, even us playing. It was very close, and up to the last stroke we really didn’t know which way it’s going to go.â€

â€œOn each point, I think each game we played in the third set especially, was very close. I had a lot opportunities on his serve in the third set; he had on my serve in the second and third set. So really fortunate to get through this match. For these matches, you really play this sport. To play the final address, three and a half hours against the best player in the world, it’s incredible achievement for me. I’m very proud of today’s performance.â€

â€œIt’s the best four months in my life. But it’s only the start of the season. I think it’s a bit early to talk about getting that top spot in the rankings. It’s still quite a big difference. Rafa is definitely the best player in the world now. If I want to have that shot, the No. 1 ranking, I need to play consistently well throughout the whole year. We all know that clay court is his favorite surface, and obviously somewhere where he plays his best. But this is going to give a lot of confidence boost for the upcoming clay court season, the wins that I had on the starting tournaments of the year. Still, this streak is incredible that I have, and I want to keep on working hard and try to get more success.â€

As for Nadal,”I had chances in both places. I think here was really close with the 6-5, 15/30. But when you play against one player like Nole, first thing, he’s very good; second thing, he’s playing with big confidence. When you’re winning, it’s easier to keep winning, or less difficult. So all these facts. I probably didn’t serve as well as I did during all the tournament. I didn’t serve as bad as I served in Indian Wells, but the thing is, my serve didn’t help me today to start the points with a little bit of advantage.

â€œI was there fighting until the last point. Nothing left in my body right now, so that’s the sport. I love these kind of matches. For sure I love to win, not lose. (Smiling.) But from everything you learn. I had a fantastic American hard court season, two finals, and am ready for clay.â€

As for Nadals’s goals for the year, â€œMy goal is be competitive in every tournament. If I do that, I going to have my chance to be No. 1. He won two tournaments in a row right now, very big tournaments and one Grand Slam. Normal thing is he will be No. 1 in the next month, month and a half, two months. I don’t know. Depends on my results on clay. For sure he will be there, no? Iâ€™m going to fight for me. If I am solid, if I play a very good clay court season, we will see what’s going on after.â€