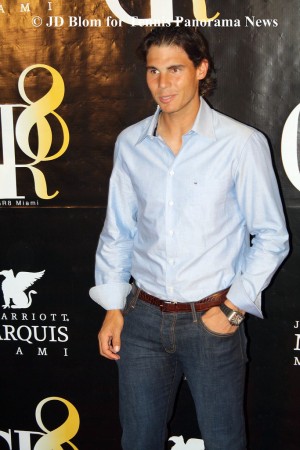 Q.Â  Tough day for you.Â  What do you think the turning point was in the match today?
RAFAEL NADAL:Â  Well, he’s playing with confidence, that’s for sure, no?Â  Probably his best moment of his career.Â  I think I didn’t play as well as I did during a lot of moments of this tournament today.
I was a little bit more tired than usual during the match, that’s true.Â  But in general, that’s everything what I said is part of the game.Â  So the sport is this.Â  Sometimes you win; sometimes you lose.
Last two times myself, I had to lose.Â  I had chances in both places.Â  I think here was really close with the 6â€‘5, 15â€‘30.Â  But, you know, when you play against one player like Nole, first thing, he’s very good; second thing, he’s playing with big confidence.
When you’re winning, it’s easier to keep winningÂ â€‘â€‘ or less difficult, no?Â  So all these facts.
I probably didn’t serve as well as I did during all the tournament.Â  Well, I didn’t serve as bad as I served in Indian Wells, but the thing is, my serve didn’t help me today to start the points with a little bit of advantage.
I was there fighting until the last point.Â  You know, nothing left in my body right now, so that’s the sport.Â  I love these kind of matches.Â  For sure I love to win, not lose.Â  (Smiling.)
But from everything you learn, I had a fantastic American hardcourt season, two finals, and ready for clay.

Q.Â  A that what a impressing you most about Novak, a his mental strength?Â  He might not have had it a few years ago but it’s there now.
RAFAEL NADAL:Â  He always was there.Â  He’s focused and confident and playing well.Â  I wasn’t that far, so that’s true, no?
Well, what he’s doing a unbelievable, winning four tournaments in a row, difficult ones, one Grand Slam, two Masters 1000, Dubai.Â  So it’s great.Â  He’s a great champion, and all the best for the rest of the season for him.
We’ll see what’s going on right now.

Q.Â  Looked near the end that he might be getting tired and he was looking at his box.Â  Looked like he was ready to maybe go down a little bit, but he seemed to play very strong at the end.Â  Were you surprised with that?
RAFAEL NADAL:Â  No.Â  He has a perfect performance physically, because when you play and you win one Grand Slam, one Masters 1000 last week, so he’s in the perfect performance right now, no?
I think he’s healthy.Â  He can run to every ball.Â  Seems like he’s less tired than.Â  Before when he runs a lot, he can play long points and still running.Â  So he’s good.
In general, the easiest thing to say a he’s very good tennis player.

Q.Â  You seemed to have a lot of double faults today.
RAFAEL NADAL:Â  How many?

Q.Â  What do you think a the reason that you weren’t serving as well?
RAFAEL NADAL:Â  I always say the same:Â  If I know the reason, I never going to do it.Â  That’s part of the game.Â  Maybe because I was a little bit more nervous than other days, second final, maybe because I never won here and this is the third chance.
I played against a player who’s playing well, and I lost last week.Â  All of these facts maybe can affect a little bit to be a little bit more nervous, and the serve is a little bit part of that.
In general, I think I didn’t play as well as I did two days ago.Â  I didn’t play bad, that’s true.Â  I was close on probably his favorite surface and against the best Novak Djokovic.

Q.Â  Which was the harder match, last week or this?
RAFAEL NADAL:Â  Physically this, for sure.Â  I was very tired at the end.Â  I think I played a little bit better the beginning of last week’s final.Â  But wasn’t real for me because I didn’t play well during all the tournament, so I wasn’t ready to play all the match that level.
This week I was ready to play at my highest level because I played a very, very good tournament, playing better every day.

Q.Â  How far are you…
RAFAEL NADAL:Â  No, I think was more difficult the match of today because I was closer to win.Â  But was a little bit more difficult to accept maybe, because I was ready to win last week.Â  I was there.Â  Wasn’t very far, but probably mentally or physically I wasn’t enough ready well to beat Novak.
This time I was ready to win.Â  I didn’t play perfect, so I lost.

Q.Â  How far are you from where you want to be?Â  I know you had a month that you couldn’t practice or anything.
RAFAEL NADAL:Â  I am not that far.Â  I am very close, no?Â  I had a very good season, American season, probably the best one of my life here, in Indian Wells and Miami, having two finals.Â  It’s true I won a few times in Indian Wells, but after I lost in quarterfinals in Miami.
So both times I lost in quarterfinals, I think.Â  One time against Novak and one time against Del Potro.Â  This time I was very solid.Â  Indian Wells I was very far from where I want to be.Â  And where I want to be, you never know where is the top.
I am happy.Â  Important thing is be happy how you are playing, be comfortable when you go on court.Â  That’s what I feel right now.Â  Every day when I go on court, I think I played solid, aggressive with the forehand.Â  Today remain few aspects to win this kind of match against Novak.Â  That’s work to improve that for Monteâ€‘Carlo.

Q.Â  Do you feel like he’s breathing down your neck to be No. 1?
RAFAEL NADAL:Â  No.

Q.Â  Did you feel like in the clay court season you can separate like you have in the past?
RAFAEL NADAL:Â  No, I think he’s going to be No. 1.Â  I don’t feel he’s breathing on my neck.Â  I don’t know what’s the expression in English.Â  The thing is, that’s part of sport.Â  We will see at the end of the season who’s No. 1, who’s No. 2, and who’s No. 20.
That’s tennis.Â  For me, be No. 1 is a goal, but not.Â  That’s always difficult to say, because you are No. 1 or you are not No. 1.Â  It’s difficult for me to say my goal is be No. 1.Â  My goal is be competitive in every tournament.Â  If I do that, I going to have my chance to be No. 1.
He won two tournaments in a row right now, very big tournaments and one Grand Slam.Â  Normal thing is he will be No. 1 in the next month, month and a half, two months.Â  I don’t know.Â  Depends on my results on clay.
For sure he will be there, no?Â  I going to fight for me.Â  If I am solid, if I play a very good clay court season, we will see what’s going on after.

Q.Â  At the end of the first set, at 5â€‘2 when you came up to serve for the set, you went for the ice scarf.Â  You used it, and at the end you were bending over.Â  Were you feeling as if were going to pass out?Â  Have you had any type of treatment since the end of the match?
RAFAEL NADAL:Â  Well, was very hot outside.Â  Can you see?Â  You was there?Â  (Laughter.)

Q.Â  I was in the shade.
RAFAEL NADAL:Â  You were in the shade, yeah, so you wasn’t there.Â  So that’s what happened.Â  Was very, very hot outside there today.Â  I sweat crazy, like ten Tâ€‘shirts today.Â  So I was very tired at the end.Â  Seriously, very tired.
One of those kind of matches, it’s better to finish as soon as possible, because I was very, very tired at the end.Â  But I was there fighting until the last point, because I felt if I am tired, the other one must be tired, too.Â  The hot and the sun is for both of us.

Q.Â  This time last year when you were sitting there having not won this tournament, you then won Monteâ€‘Carlo, Madrid, Rome, Paris, Wimbledon.Â  So you must take some comfort in that.Â  Your favorite surface is about to happen.
RAFAEL NADAL:Â  Yeah, that’s one time in life win every tournament on clay.Â  Nobody does in the history, only myself last year.Â  So it’s difficult to imagine two years in a row can repeat that.
For me, seriously happy about how I’m playing, happy about my level of this tournament.Â  Normally when I play well on clay I have a little bit more advantage, so let’s see what’s going on week in Monteâ€‘Carlo.
I’m going to prepare.Â  I’m going to start to practice on clay.Â  You know, always the adaptation after almost ten months without play on clay is hard the first days, so we will see.
Hopefully I going to be playing well this tournament.Â  This is important confidence for me.Â  That’s all, no?Â  Let’s try my best in Monteâ€‘Carlo.Â  First tournament of clay is always important.
But it’s not going to be perfect.Â  Remain a lot.Â  I don’t going to win ten times in a row Monteâ€‘Carlo.Â  That’s sure.Â  No, I won six in a row.Â  I going to try my best for the seventh, but know how difficult is every tournament.

Q.Â  That was part of my question, too.Â  You’ve been to the finals here a few times.Â  How tough it was to lose this match today?
RAFAEL NADAL:Â  Well, wasn’t very lucky weekend for me, no?Â  I think I was very close in 2005; I was very close today.Â  I’ll try next year.Â  That’s what I can say.Â  I didn’t feel sad.Â  No, I feel okay.
I think I try my best and it’s not big disappointment, no?Â  Some tournaments I arrive one time and you win.Â  This tournament, three times, three loses.
So if we see my record on finals, normally I have a very positive record winning finals.Â  This tournament breaks a lot this positive record for me, no?Â  So let’s try next years.Â  I don’t know.Â  I love this tournament.Â  I love to play.Â  So when you play three finals, you can win.Â  We’ll see.