You are here: Home / Contributors / Made My Day – Videos from Cliff Drysdale’s Fundraiser During the Sony Ericsson Open 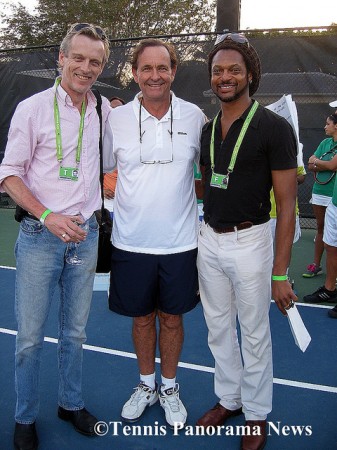 The 2011 Sony Ericsson Open is now history. Before play was officially underway, Kim Clijsters, Andy Roddick, Caroline Wozniacki and Ryan Harrison supported the Greater Miami Tennis Club as part of Cliff Drysdale’s fundraiser at the Ritz-Carlton of Key Biscayne inside the tennis center that bears his name.

Last year, Clijsters and Roddick considered the same event their good luck charms as both went on to win the Sony Ericsson Open. I guess it’s true, then, that lightning doesn’t strike twice in the same place. But the defending champions had a great time. Seeing tennis players doing what they love to do without the stress of a match was a beautiful thing.

The Ritz-Carlton of Key Biscayne is more like a palace than a hotel. I couldn’t help but thinking we were approaching royalty as we drove into the gated grounds. Perfectly designed and manicured landscaping all around, we finally found the tennis center valet. Once on the courts, I was able to see what Serena Williams once said about green clay being slower and grittier than the crushed red brick used in Europe and South America. It almost looks like gravel. On one of the outside courts, I recognized former Miami runner-up Guillermo CaÃ±as playing a double’s match with other members.

The staff at the Ritz-Carlton gave customer service new meaning. Attentive, genuinely nice, they made us feel at home. Perfect weather, live musicians, an open bar, passed hors d’oeuvres, and the chance to test-drive Cadillac’s new models would have attracted anyone who wanted to support a worthy cause..

Even with the great atmosphere and fun tennis exhibition , the event highlight came at the end when I approached Drysdale, who’d kept the proceedings efficient and light-hearted with his infectious personality and wit. He’s practically a stand up comedian.

“Just in case I never have another opportunity to say this to you, I just wanted to let you know that you are the voice of tennis for me. Didn’t matter where I was in the house, if I heard your voice on the television, I knew tennis was on. I enjoy your commentary, your humor, and the personality you bring in the booth is always a perfect foil for your colleagues.”

His face lit up more than it naturally does. “Wow. Thank you so much for telling me that. You have made my day,” he replied with an outstretched hand. Next thing I knew, he touched the side of my face as though I were his son. He made my day, too.

Michelle Payer, the media relations director who invited us to cover the event, insisted that I pose with Drysdale for a photo. As we posed, I told him of my sister’s home in South Africa and JD, who’s originally from the Netherlands, asked him if he spoke any Afrikaans, the Dutch dialect spoken by the Dutch who settled there centuries ago. Personal connections make every experience more memorable.

The entire event benefited the Greater Miami Tennis and Education Foundation and like last year, kids from the foundation attended the event as ball boys and girls. They earned that privilege based on their report cards, attendance, leadership and other factors. The $13,000 raised will benefit these socially and economically challenged Miami children, will help them learn tennis and valuable life skills by participating in free, affordable GMTEF tennis and education programs throughout the school year, as well as during the summer.

Next year’s event promises to be even better.