You are here: Home / Contributors / Chatting with Wozniacki, Jankovic, Bartoli and Peer at the WTA All-Acess Hour at Family Circle Cup

On Monday at the Family Circle Cup the WTA held it’s All-Access hour where the media had the opportunity to talk to the top eight seeds at the tournament in a round table format.Â  It is unique to the WTA and really allows for the playersâ€™ personalities to shine because it is prior to the beginning of their matches, and the atmosphere is extremely relaxed.Â  I was impressed with the poise of all the women, but was even more impressed with how approachable and bubbly they were as they answered several on and off-court questions.Â  During the hour, I was able to speak with four of the top seeds:Â  Caroline Wozniacki, Jelena Jankovic, Marion Bartoli, and Shahar Peer. 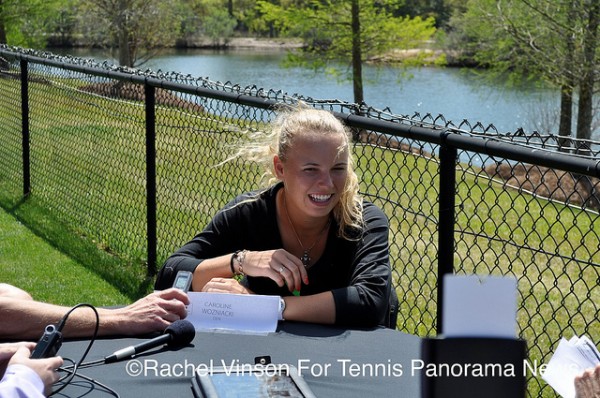 The player who received the most attention was No. 1 seed and World No. 1 Caroline Wozniacki. I asked her about her recent trip to New York City to attempt to visit US President BarackÂ  Obama, and her fashion choices on the court since pairing with Stella McCartney in 2009:

Tennis Panorama News: You had tweeted after your match in Miami that you left and went to New York and there were some rumors that you wanted to meet the president.Â  Can you talk about that a little bit?

Caroline Wozniacki: I wanted to stay in Miami actually in the beginning, wanted to relax a few days on the beach and by the pool but my friend called me and asked if I wanted to come to NY and show me a little bit around and also meet the president, and I was like, Iâ€™m not sure because it was the night I lost and it was late, and I felt it probably wasnâ€™t going to happen.Â  Then I am lying by the pool and it is like 11:30 the next day and Iâ€™m thinking why not, why not go.Â  So I called my friend and said that I wanted to come and I go there and it ends up that it is too late to go to the dinner because all the security and everything, but definitely next time.

Caroline Wozniacki: Not too much to be honest.Â  (Laughter)

Tennis Panorama News: A fashion question:Â  Youâ€™ve been with Stella [McCartney] since 2009. What is your favorite dress that youâ€™ve worn?

Caroline Woznaicki: I think the US Open dress last year was really nice with the bright yellow and the dark, dark grey.

She also received some more â€œinterestingâ€ questions from the media:

Question: You hear certain stories about your love life and do you have a boyfriend or not, so the question that comes up is, do you have any funny stories you want to share with us about your friends trying to set you up with other famous athletes or celebrities?

Caroline Wozniacki: Ummmm.Â  I feel Iâ€™m put on the spot here. (Laughter)Â  I probably have a few funny stories but Iâ€™m not sure if I want that to come out in the media.Â  But, sometimes Iâ€™ve been laughing a little bit because at one point according to the media who is trying to set me up with different guys, I had 6 boyfriends in 5 weeks.Â  So, I thought that was very impressive.Â Â  I have no idea how that happened.Â  Every week I got messages from my friends, saying, â€œOh great you I hear you have a new boyfriendâ€ and the were sending me the magazines where ever I was, and I was laughing b/c there was absolutely no truth to the stories, but you canâ€™t really do anything.Â  And then they also made a list of guys they thought I should be dating. So that was interesting. 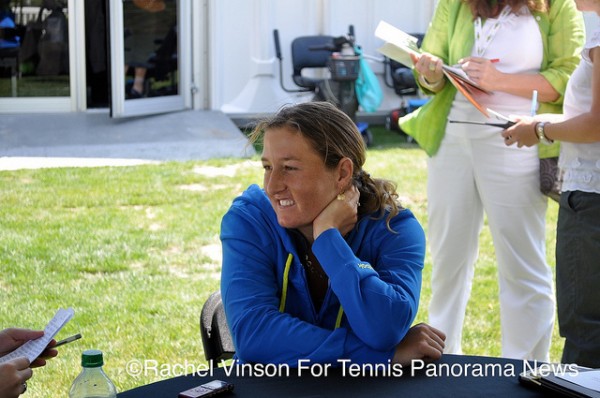 Shahar Peer was part of the upbeat atmosphere as well:

Tennis Panorama: What are some things you like to do outside of tennis?

Shahar Peer: It depends when I am home or not home.Â  If Iâ€™m home I try to be with my friends and my family as much as possible and you know and hang out and do whatever I have to do, and when I am traveling if I have time I go for shopping or sometime I just relax and if there is anything to do like sightseeing or meet people.Â  It changes.

Question: How are you?

Shahar Peer: That was the last question. (Laughter)

In their interviews, both Marion Bartoli and Jelena Jankovic discussed their renewed desire to be on the court: 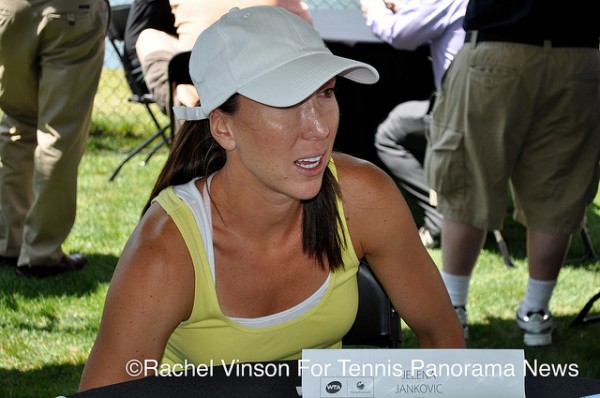 Question: When you have a coaching change do you look at it as a period of adjustment or as something fresh and new?

Jelena Jankovic: Coaching change is fresh and new but obviously it is still a new relationship so we are still adjusting to each other, getting to know each other, because itâ€™s different.Â  He is a new person a new coach and itâ€™s something new to me.Â  But it is going pretty well right now.Â  Working hard and giving my best on the practice court and it gives me motivation because when someone new comes on board you really feel like it is a new beginning, get yourself going again, and I feel motivated, and the most important thing is that I am healthy.Â  I can go on the court and really do my job and enjoy myself, and you know Iâ€™ve been 1 in the world and there were times I had lack of motivation I didnâ€™t really feel like working hard, and I kind of fell flat and now I feel like I am back again, and I feel like I can come back and do really well again.Â  I was injured for the whole last 6 months of last year, I had an ankle problem I couldnâ€™t really play, but now I am just excited and eager to be on the court and really play the game and have fun with it. 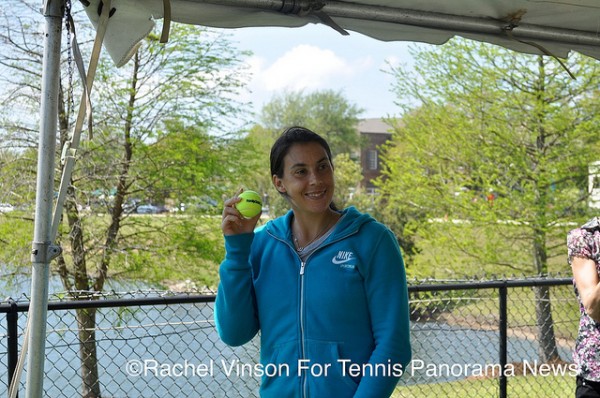 Tennis Panorama News: How hard was it to come back from your calf injury?

Marion Bartoli: It the worst moment ever.Â  Iâ€™ve had to deal with some tough moments of course but this one was extremely tough.

Tennis Panorama: Do you feel like you are back where you want to be?

Marion Bartoli: I honestly didnâ€™t expect to be back that soon and that great because even the results went beyond my expectation to be able to do the final at Indian Wells.Â  [In Miami] I lost in 3 sets in 3 hours to Vera Zvonareva who is number 3 in the world and still have a chance to win this match, and I was feeling tired from Indian Wells so I feltÂ  like if I would have had some normal days of recovery I would have been able to win this match. So really, I came back stronger and in a way it makes me stronger mentally b/c now when I am on the court I even battle harder b/c I am just so happy to be there.

I really enjoyed sitting across from these women to get a sense of what they were like off the court, but on Tuesday the tournament begins for them and the only thing that matters is what is left on the court.Â  And as fun as it was chatting with them, I am ready for some tennis.Â  Let the games begin.

Rachel Vinson is the author of Onthegotennis.com and is covering Family Circle CupÂ  as media for Tennis Panorama News. Follow her tweets from Charleston at @GVTennisNews and follow her on twitter at @Onthegotennis.