Clijsters Out of Action, May Miss Roland Garros

Kim Clijsters‘ Roland Garros is in question. Clijsters reported on her website on Sunday

She had announced on her website on Tuesday that sheâ€™ll be out for four weeks with right shoulder and wrist injuries.

Another Day, Another Battle for Wozniacki at Family Circle Cup

Chatting with Wozniacki, Jankovic, Bartoli and Peer at the WTA All-Acess Hour at Family Circle Cup

Novak Djokovic and Robin Soderling out of Monte Carlo both with knee issues. 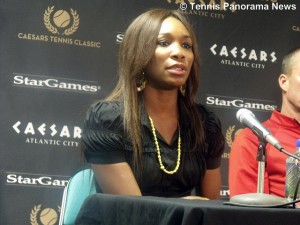 Venus Williams will be traveling to Stuttgart, Germany to support the US Fed Cup team. She is not expected to play but she keep her eligibility to compete in the Olympics alive.

â€œOur primary concern is Serenaâ€™s health and supporting her needs to get better. Weâ€™ve been advised by Serenaâ€™s management that Serena needs to remain in the United States to receive daily medical treatment. In regards to the 2012 Olympic eligibility issue, the rules are written in such a way that they are open to interpretation. We are not focused on Serenaâ€™s Olympic eligibility right now. We are focused on beating Germany.â€

After years of the tournament being played on the hard courts of Crandon Park in Key Biscayne, FL,Â  one of the major Junior tournaments is moving to Plantation, FL back to clay courts. The move is to make US junior players better on clay.

Davis Cup Tickets cup tickets for the US vs Spain tie in July went on sale first to USTA members in a special pre sale. The tickets which represented 80 percent of the venue sold out in less than 2 hours. The remaining tickets which went on sale to the general public sold out on Friday.

Golf is not Roddick’s Game

Big thanks to @zachjohnsonpga for letting me tag along yesterday! Gonna watch him do work at Augusta this week.

How the mighty have fallen

Beware of the Roaming Gnome

Azarenka wins her second straight WTA singles title, having won at Miami last weekend, and the seventh of her career.

Victoria Azarenka: “It was unusual to go from Miami on hardcourts to here on clay and do so well. I’m more than pleased with the experience. It was important just to keep my mind fresh and do the same things I did in Miami. I used to practice here when I was 14, so coming here brings me back – I love it here.”

Andujar: â€œIt wasnâ€™t easy. I didnâ€™t expect this title and it comes as a surprise for me.â€

â€œI was very confident before the match. I thought about winning and yesterdayâ€™s win gave me a lot of confidence. I played in a way that made him tired, being very aggressive and making him run a lot.â€

â€œCasablanca was a great preparation for me. The conditions are close to the ones in Europe and itâ€™s only a two-hour flight from Valencia. This is a very good tournament to start the clay season.â€

Starace: â€œHe played a great match. He was too aggressive and didnâ€™t give me one chance, so congratulations to him. He was playing a very high level.â€