A 6.4% increase in total prize money, two new courts and a 125th anniversary competition to win tickets for this yearâ€™s Championships were among the announcements made by the Chairman and Chief Executive of the All England Lawn Tennis & Croquet Club (â€œAELTCâ€) when the media descended on SW19 for Wimbledonâ€™s Spring Press Conference. on April 19th.

Philip Brook, the new Chairman of the AELTC (left) with Ian Ritchie, the Chief Executive

However, Round 1 losers in the singles events get just 2.2% more than last year, while the prizes available in qualifying, for the first three rounds of the two main doubles events and for the whole of the mixed doubles, invitation and wheelchair events have been frozen at last yearâ€™s levels.

Prize money going up proportionately more at the top end has been a theme of the last few years. Indeed, since Wimbledon first introduced equal prize money for men and women four years ago, the prize for winning a singles title has gone up by a total of 57%, far in excess of the 15% increase for those going out in Round 1.

Philip Brook mentioned the increasing importance of the box office appeal that the top players bring to the event as a major factor in the decisions regarding prize money. It is hard to escape the conclusion that the tendency of the media to headline the amounts going to the singles winners may well be another factor influencing how the increases are allocated by the grand slam events. 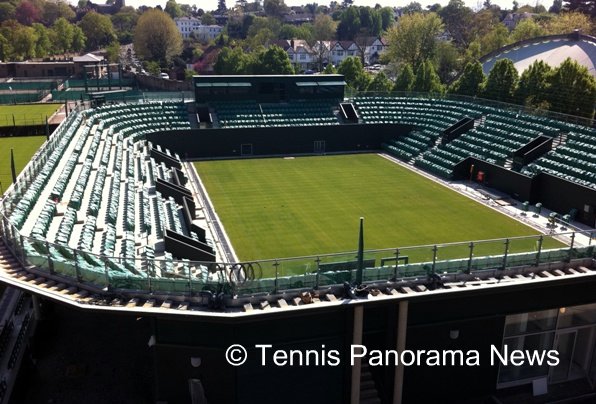 The new No. 3 Court will seat 2000, with 1500 seats reserved for Court 3 ticket holders for days 1-7. The other 500 seats will be unreserved and available to holders of ground passes on a first-come first-served basis. 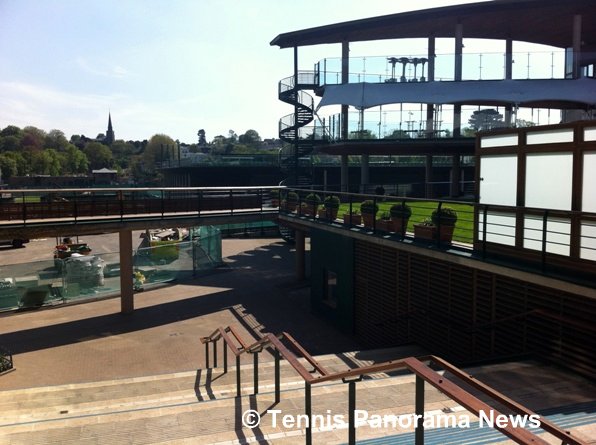 View past the members' enclosure towards the new No 3 Court

Court 3 will be the fourth court at Wimbledon to be equipped with Hawk-Eye. The ticket prices are the same as for Court 2 and it was made clear that it will be treated as roughly equivalent to that court as far as the programming of matches is concerned. There is also a new No. 4 Court adjacent to it.

A Wimbledon tennis panorama, looking over parts of Courts 4-11, with Court 2 in the distance.

The 125th anniversary of the Championships is being celebrated in various ways, the one of most immediate interest to tennis fans probably being the Wimbledon 125 competition on the redesigned www.wimbledon.com website, with prizes of 126 tickets (not 125, simply because they want them to be in pairs) for Centre Court and No. 3 Court at this yearâ€™s Championships on offer over the next six weeks.

There will also be a special â€˜125thâ€™ logo, four 30-minute documentaries recounting the history of the Championships and other special events.

There will be more space in the competitorsâ€™ food court this year, allowing a greater range of food to be provided, including fresh pasta prepared to order. After the Olympics in 2012, the player facilities will be completely revamped in time for the 2013 Championships.

The AELTC have a good habit of redeveloping the facilities at the Club in ways that move with the times while still blending in with the traditional atmosphere, but theÂ proposed design for theÂ new three-story playersâ€™ area (shown above) may prove to be quite controversial,Â meeting withÂ a variety of reactions, both positive and negative,Â from the media throng.

It was reported in January that Andy Murray planned to approach the AELTC to see if it would be possible to organize something similar to the â€˜Hit for Haitiâ€™ and the â€˜Rally for Reliefâ€™ that have taken place before the last two Australian Opens.

The AELTC confirmed that they have since talked to Murrayâ€™s team but that there are factors which make it more difficult to organize such a pre-tournament event at Wimbledon than at any other slam. The main reason advanced for this was that all of the other grand slam events have qualifying on-site and hence they have a fair number of staff on site (together with at least partial catering and other functions in operation) from a few days before the main draw starts, whereas most of the staff for Wimbledon only arrive for the first time on the Saturday or Sunday.

They did make it clear that they were not saying such an event could never happen, but were keen to point out that it was not the only way in which money could be raised for charitable purposes, citing the donation of the proceeds of Centre Court ticket resales as one of the ways in which Wimbledon already generates significant funds for good causes.

I imagine such an event might seem a bit more feasible if they were already planning it at the time when the contracts for the following yearâ€™s Championships were being sorted out, but it is not hard to think of many other issues that would need to be taken into account as well.

A little bit of politics â€¦

Ian Ritchie pointed out that while legislation has been put in place to protect the Olympic Games (including the Olympic tennis event at Wimbledon) from ticket touting, the Championships held just a few weeks earlier get no such protection.

The AELTC have also raised with the government the issue ofÂ  players being taxed pro rata on their global endorsement income for every day that they are in the UK. They believe that the UK is the only country that attempts to tax endorsement income generated elsewhere in this way and moreover that it is inequitable that only players in individual sports are affected â€“ teams and their players do not have their income from global endorsements taxed in the same way.

At first sight, this seems quite esoteric, and under present conditions, it is hard to imagine public support for the removal of a tax on multi-millionaire sports stars, however inequitable it may be. However, that is not the point â€“ the reality is that once it starts to become an issue with the players (and apparently it has been coming up in some discussions), having such a tax when other countries do not impose it is bound to have adverse consequences for UK events like Queenâ€™s competing for players with tournaments in other countries and for events that could easily be held in other countries instead.

While they do not believe this tax will ever deter players from entering Wimbledon, they believe events like Queenâ€™s are more vulnerable and that this tax could potentially be a factor in determining whether the World Tour Finals remain in London after 2012. They made the point that the country has far more to lose were such events to go elsewhere than it gains by imposing this tax.

A quick look around the grounds 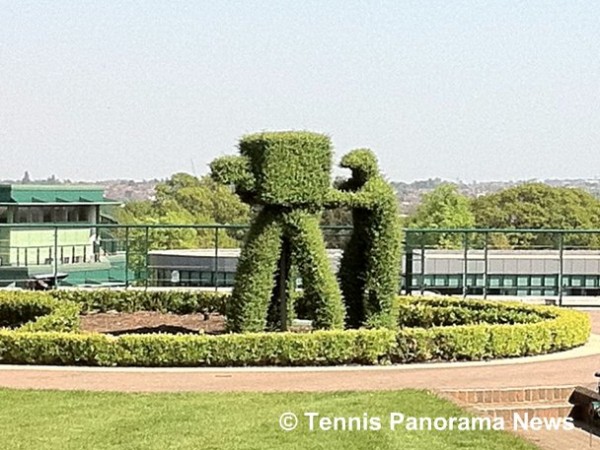 It is still nearly 9 weeks until the TV cameras descend en masse for the 125th Anniversary Championships, apart from one cameraman who seems to have sneaked in early to claim his place.

Preparations appear to be going well, with the grass looking lovely on courts that do not yet have nets or lines on them, as you can see from this view of Courts 14-17 looking towards Centre Court. 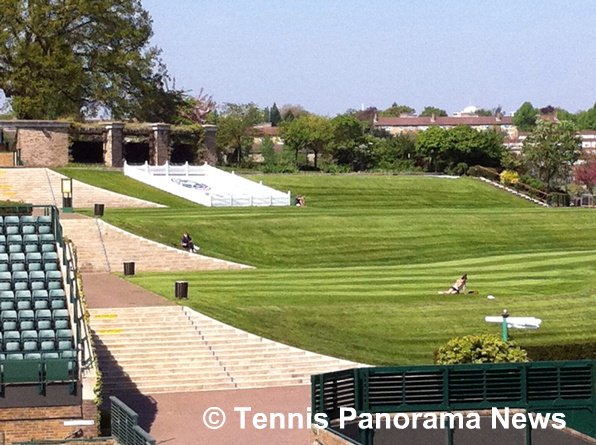 Even the Aorangi Picnic Terrace (or â€œHenman Hillâ€ to its friends) was looking very serene, on a day when the weather could have led you to believe that it must be June already!

Key dates to look out for

The 125th Championships start on Monday 20 June, with the queue not starting until 8 am the previous day. Wild cards will be announced from 6 June, with seedings announced on Wednesday 15 June, two days before the draw.