This New Yorker was born Richard Raskin. Raskin was a charming Ivy-League grad, an athlete, an officer in the Navy and an ophthalmologist. He was a man who never lacked female attention. He married a model and they had a son. To those around him he had a great life. Not quite.

Raskin had been living with a secret yearning since an early age “ living with an alter ego inside of him called Renee. To everyone™s surprise he left his family and decided to get gender reassignment surgery. Dr. Richard Raskin became Dr. Renee Richards. 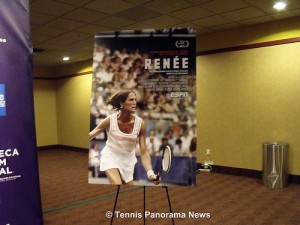 Richards played on the women’s professional tennis tour from 1977-1981 and reached as high as No. 20 in the singles world rankings. She was banned from playing the US Open by the United States Tennis Association (USTA) in 1976 because Â she refused to take aÂ chromosome test. The USTA had a policy that only women born as women could participate in the US Open. Richards fought the ban and a 1977 Supreme Court decision ruled in her favor “ a first for transsexual rights.

Thursday evening on the red carpet was about celebrating her life. Richards broke with traditional “Hollywood-style” tradition that usually dictates that the star of the show walk the red carpet last. She took to the carpet first “ a little overwhelmed to the point of almost blushing. She seemed amazed by the many photographers asking her over and over to pose and smile for their cameras. She seemed to be taken aback by it all.

As she strolled down the red carpet to engage interviews you could see her shy smile radiating as brightly as her red almost floor-length gown. Instead of taking on a group of media reporters all at once she spoke with each of them one-on-one. She took her own time with her answers despite time constraints and she gently answered questions as though she were carrying on a conversation with close friends. 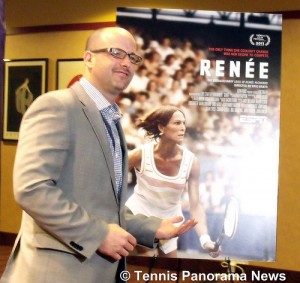 Following Dr. Richards on the red carpet included the films director and producer Eric Drath who first approached Richards about doing a documentary on her in the first place and former player Virgina Wade who competed against Richards on the tour.

Tennis Panorama News spoke with Dr. Richards about the film and about tennis in general. Richards never really wanted to do the film, since she leads a very private life now, “Eric Drathâ€˜s was after me for months, I didnâ€™t want to do it.” Drathâ€˜s sister had been a patient of Richards since she was in infant which is where Drath had found about Richardsâ€˜ life. Drath thought that there are generations who Â didnâ€™t Â know anything about Richards and that her story needed to be told about struggles of coming out as a transsexual and playing professional sports.

As for what she hopes people get out of her story, Richards said, “Iâ€™d be happy if people became enlightened a little bit more about the problems of identity.”

Richards keeps up on the current pro tour, “(Roger) Federer, (Rafael) Nadal and now (Novak) Djokovic are such great players, you have to be in awe watching them play. As for her assessment of the womenâ€™s tour, “itâ€™s not exactly the same because with Serena (Williams) and Venus (Williams) either being injured or having some medical problem thatâ€™s taken a lot away from the womenâ€™s tour.Â  Itâ€™s going to have to be some young players on the womenâ€™s tour that are going to have to give it the luster that it has lost or temporarily lost with Serena and Venus being out. Maybe Caroline Wozniacki will assume that stardom because sheâ€™s young and sheâ€™s quite capable and maybe a couple of the other young players will come along too and become stars.”

“You always have a star every decade â€“ Martina (Navratilova) and Chrissie (Evert) came along and that was great. Steffi ( Graf) and Monica Seles. But there isnâ€™t always a star out there, weâ€™re just hoping that one of the young players step up.â€œ

The movie Renee will be playing during the Tribeca Film Festival which runs until May 1. For more information on the film and the film festival.

The movie is presented by Live Star Entertainment in association with ESPN Films and will air on ESPN in the fall. 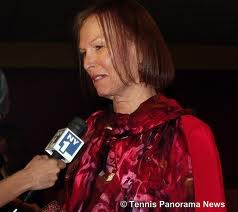